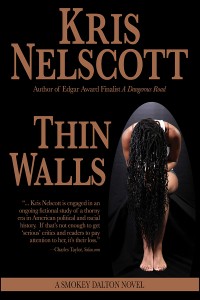 Smokey Dalton and Jimmy, the young boy he protects, have settled into a new life on Chicago’s South Side. But when Smokey gets hired to investigate the death of a black man in a local park, he realizes that the murder might not be an isolated case.

The Chicago Police Department doesn’t really investigate black deaths, particularly near the South Side. Smokey thinks the case easy, until he digs deeper into the history of the area, a history that includes gangs, racism, and secrets so dark they threaten his very existence.

Chosen as one of the top ten mystery novels of the year by the Chicago Tribune, Thin Walls shows why Publisher’s Weekly gave it a starred review, and Booklist calls it “another fine entry in an outstanding series.”

“Nelscott doesn’t use a specific historical moment to frame the action this time, but she still puts the late-sixties setting to good use, showing how nearly every move Smokey makes, both professionally and personally, is constrained by the racial climate of the times.  Another fine entry in an outstanding series.”
—Booklist

“Nelscott handles this busy plot with aplomb and convincingly portrays the frustrations of various groups of whites and blacks as inexorable changes create friction.  Dalton is a strong, compelling hero facing a tough case and an equally tough fight to protect his son and survive.”
—Publishers Weekly
starred review

“The sheer audacity of starting a mystery series set in 1968—using the assassination of Martin Luther King Jr. in Memphis and then the Democratic National Convention in Chicago as backdrops—gives way to another kind of courage in Kris Nelscott’s third book in her triumphant series about black private investigator Smokey Dalton.”
—Chicago Tribune

“The Dalton books are fast, realistic, full of powerful atmosphere, compelling characters and telling analysis of American history and what it means to be black in the land of the free.  They get better every time.”
—The Statesman Journal
[Salem, Oregon]

“The third Dalton historical mystery, Thin Walls, is a fabulous tale that brings to life the turbulent sixties through the frustrations of various groups. This technique could have proven fatally stereotyped, but instead Kris Nelscott makes each group distinct in their rage at their inability to truly matter.  The mystery is first class and Smokey’s efforts to keep Jimmy clean feel genuine and makes him humanly like most caring parents.  The series is as big a winner as the Detroit Tiger’s World Series (Jets Superbowl was still a few weeks away) victory.”
—Bookbrowser.com

“Thin Walls is a gripping, true-to-life mystery and description of the social fabric of Chicago in December of 1968.”
—Mysterious Women

“[Thin Walls] is very enjoyable, with lots of real life twists and tensions.  It reminds us of where we have been as a society and how far we still need to go.”
—Mysterious Women

“The plot is compelling, but it’s the astringent insight on the lives of African-Americans trapped by racism both overt and covert that makes this book fascinating.”
—Rocky Mountain News

“This is the third in this award-winning series by Nelscott…If you’re new to the series, Thin Walls will make you want to go back and read the first two.”
—Rocky Mountain News

“When Kris Nelscott’s first novel, ‘A Dangerous Road,’ came out three years ago, the mystery writer Loren D. Estleman called her ‘a Ross Macdonald for the black experience in America.’  That’s a large claim.  For a lot of people, and I’m one of them, Macdonald’s Lew Archer novels are the pinnacle of American detective fiction…Now, with ‘Thin Walls,’ the third book in Nelscott’s Smokey Dalton series, Estleman’s claim feels more than ever on its way to being justified.”
—Charles Taylor
Salon.com

“Somebody needs to say that Kris Nelscott is engaged in an ongoing fictional study of a thorny era in American political and racial history.  If that’s not enough to get ‘serious’ critics and readers to pay attention to her, it’s their loss.”
—Charles Taylor
Salon.com