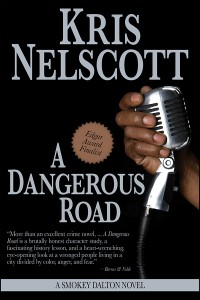 Private Investigator Smokey Dalton works for Memphis, Tennessee’s black community. He has almost no interaction with the white hierarchy, even though they exist only blocks away. So he’s surprised the day a white woman walks into his Beale Street office. Laura Hathaway has sought him out because he’s a beneficiary in her mother’s will, and Laura wants to know why. So does Smokey. He’s never heard of the Hathaways, but his search will take him on a journey that will change everything he’s ever known.

Set against the backdrop of the strike and protests that will end with Dr. Martin Luther King’s assassination, A Dangerous Road combines the politics of race, betrayal, unexpected love, and the terrible cost of trust into a story so memorable the Mystery Writers of America chose it as one of the top five novels of the year.

Praise for A Dangerous Road

“Powerful stuff, with a role for every major black actor in Hollywood.”
—Kirkus Reviews

“Smokey Dalton has an obvious antecedent in Walter Mosley’s Easy Rawlins, but he can stand on his own just fine.  This has the makings of an outstanding series.”
— Booklist

“Nelscott has an absorbing story to tell, and she does it justice.”
—Philadelphia Inquirer

“More than just offering a puzzle, this novel encourages self-examination about identity, responsibility and the consequences of choices.  Smokey proves himself a man of conscience able to make tough choices.  His return will be cause for celebration.”
— Publisher’s Weekly

“Dalton is a man worth knowing.  Kris Nelscott is a writer who bears watching.  And their road is one worth traversing.”
— The Drood Review

“[Nelscott’s] debut mystery, A Dangerous Road, combines her story-telling talent and her love of history in an intriguing tale set in the turbulent era of the late 1960s.  I recommend it.”
—The Mystery Reader

“With A Dangerous Road, Kris Nelscott delivers an intricately plotted, historically resonant first person narrative that, while not hard-boiled, echoes faintly nonetheless of Chandler and Hammett.  A Smokey Dalton series? ’Tis a consummation devoutly to be wished.”
— Amazon.com editorial review

“More than an excellent crime novel, Kris Nelscott’s powerful debut, A Dangerous Road, is a brutally honest character study, a fascinating history lesson, and a heart-wrenching, eye-opening look at a wronged people living in a city divided by color, anger, and fear.”
—Barnes & Noble

“A Dangerous Road is an exceptionally well-written and well-researched novel that seamlessly blends fact with fiction.  Nelscott’s work clearly deserves the recognition it received by The Mystery Writers of America who nominated it for the prestigious 2001 Best Novel Edgar Award.”
—Barnes & Noble