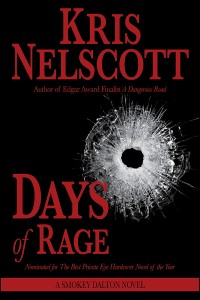 Chicago, 1969: The trial of eight protestors from the Democratic Convention the previous year has the whole world watching—and all of Chicagoland on edge.

Smokey Dalton feels the pressure: more cops on the streets, more FBI in his neighborhood. But when the landlord at one of Sturdy Investments’ South Side properties dies alone in his apartment, Smokey agrees to investigate He finds old human bones in the basement, along with hints of more.

Smokey and his girlfriend, Sturdy’s CEO Laura Hathaway, worry that Laura’s father knew who used that basement and why. Without involving law enforcement, they decide to hold a thorough investigation and discover secrets they never ever imagined, secrets that could threaten Smokey, Laura, Sturdy, and one of Chicago’s greatest institutions. Secrets worth killing for.

Praise for Days of Rage

“Nelscott, by widening the time frame, allows us to see the events of the ’60s—and their devastating effects on individual human lives—from a wider (if hardly comforting) perspective.” —Booklist starred review

“When Kris Nelscott started her impressive series about Smokey Dalton…, many critics and readers wondered how long she could keep up the pace.  “Days of Rage,” her sixth book in the Dalton series, indicates there seems to be no end in sight.” —Chicago Tribune

“Nelscott knows how to tell a story, but what she does best in her Dalton books is capture a portrait of Chicago almost 40 years ago and show how much—or how little—has changed.” —Chicago Tribune