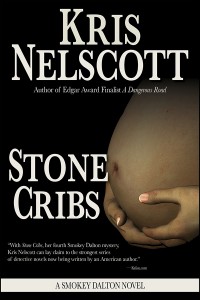 After attending a charity fundraiser, private investigator Smokey Dalton and his powerful girlfriend discover a critically injured woman in his neighbor’s apartment, and his neighbor missing. Smokey gets the woman to a nearby hospital which proves to be a mistake: the doctor won’t treat the dying woman until she tells him what happened to her. Smokey works to save the woman and find his neighbor, but everything he does makes the situation worse. Smokey has entered a secret part of America—the arcane rules of a hospital trying to follow the law as well as save lives. None of it makes sense, and all of it threatens everything Smokey believes in.

“Without the slightest hint of preaching, Nelscott brilliantly illuminates the ugliness of that era—which defines Smokey’s world but does not destroy him. Because of Nelscott’s strong hand, it also does not overwhelm the drama of this remarkable story.” —Publisher’s Weekly (starred review)

“Smokey’s voice is so authentic, his experience so heartbreakingly real, it’s astonishing to realize that the author is a white woman who was eight years old when Dr. King was assassinated.”
—Publisher’s Weekly
starred review

“Another winner in a high-class crime series.”
—Booklist

“Through four episodes, Nelscott has built a series that is both sensitive to the nuances of human relationships and painfully cognizant of how the uncontrollable forces of the historical moment can drive behavior.”
—Booklist

“Like the best of Ross Macdonald’s Lew Archer stories, Kris Nelscott’s Smokey Dalton novels are infused with an understanding of the social, political, and moral complexities of the community in which they’re set.  Her characters not only struggle with the contradictions that rule them but are in perpetual conflict with their surroundings.  Thus, brutality is no surprise, but then neither is an act of kindness.  The most dilapidated building may house a gentle soul or a rabid criminal, and so too may a luxurious home.  This type of subtlety treats readers with a level of respect that makes for a rich, rewarding experience, and so it is with Stone Cribs, Nelscott’s exceptional new novel.”
—The Boston Globe

“Nelscott’s hard-boiled style gives an added blast of energy to the captivating story, and because her characters are so nuanced and naturally complex, we don’t know whom to trust.”
—The Boston Globe

“With Stone Cribs, her fourth Smokey Dalton mystery, Kris Nelscott can lay claim to the strongest series of detective novels now being written by an American author.”
—Salon.com

“What’s strongest in Stone Cribs is how good Nelscott is at calling up the way that blacks, in the law and order of the Nixon years, lived life with the feeling that a gun was pressed to their backs.”
—Salon.com

“Nelscott brings her mysteries both a sense of moral urgency and the instinct of a muckraking social novelist.  She’s a superb plotter with a steely grasp of how to sustain tension.  I have yet to finish one of her Smokey Dalton novels without a sense that she has navigated the divisiveness of a tumultuous time in our collective history and has not slighted any of the complexities involved.”
—Salon.com

“To call [Nelscott] a fine historical novelist is to relegate these books to the past.  They read like investigations of unfinished business, a reminder of the wounds those  years inflicted that have not healed.”
—Salon.com

“Nelscott is fast becoming one of our most invaluable novelists.”
—Salon.com

“Nelscott is an author who has not gotten the attention she deserves.  One can only hope that readers will seek out her novels before she is left at the back of the book stacks.  Her work is historical, political, and a fascinating addition to the mystery genre.”
—Bookreporter.com

“This is great urban noir that stars powerful characters, especially the series regulars, as Smokey continues to smoke the competition as a window to the wild social unrest of the late 1960s…”
—The Best Reviews

“…a superb who-done-it.”
—The Best Reviews

“Ultimately, Smokey has to make the most important decision any detective has to make: whether to be both judge and executioner.  The decision he makes will challenge all readers.  This powerful plot device, combined with an excellent use of the urban Chicago setting and the convincing recreation of the late 1960s, make this a title that can be highly recommended in a series that continues to entertain at a very high level.”
—Mystery News

“Stone Cribs is an interesting mystery, detective, political and historical story, all in one.”
—Oklahoman

“One of the best things about Kris Nelscott’s terrific series about savvy survivor Smokey Dalton is the way it has used the normal pace of passing time to investigate the important social and moral issues of the 1960s without becoming the least bit doctrinaire or obvious.  Her fourth book about Dalton continues these high standards…”
—Chicago Tribune

“Nelscott’s nuanced writing makes it all as natural and inevitable as the small urban tragedies that happened every day in cities like Chicago—and are still happening, in other forms and colors, almost 40 years later.”
—Chicago Tribune

“Kris Nelscott has created an intriguing character in Smokey Dalton, a tough-guy black private eye based in Chicago.”
—Seattle Post-Intelligencer