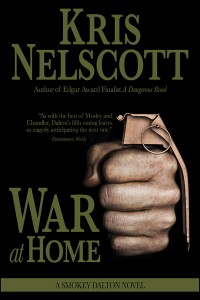 The case starts out close to home: Daniel Kirkland never arrived at Yale for the spring semester. Daniel’s mother Grace, a friend of Smokey Dalton’s and his son Jimmy’s beloved teacher, sacrificed everything to get Daniel into one of the country’s most prestigious schools.

What at first seems like a missing persons case becomes something bigger, as Smokey delves into the heart of the anti-war movement. He goes from the storied halls of Yale University to the slums outside New Haven to Harlem as he searches for Daniel. All the while Smokey hears rumors he doesn’t like, from violent attacks to talk of bombs.

Gradually he realizes that he has stumbled into America’s second war of the decade: the war at home.

“The historical moment is palpable here, but it only heightens the timeless drama of an individual attempting to carve a life from the conflicting forces around him.”
—Booklist (starred review)

Praise for War at Home

“As with the best of Mosley and Chandler, Dalton’s fifth outing leaves us eagerly anticipating the next one.”
—Entertainment Weekly

“War, which deals with the disappearance of a militant black Yale student during the long, hot summer of 1969, is a gripping read that drags us deeper into Dalton’s uneasy world.”
—Entertainment Weekly

“Nelscott excels at setting a scene, and her evocation of student unrest during that unsettled time is sharp and memorable.”
—Seattle Times

“The famously blown-up Weatherman townhouse in New York haunts the book, of course, as does the Vietnam War.  And while Nelscott provides an interesting twist, it is the time’s bleak sense of violent nihilism that lingers.”
—Houston Chronicle

“What makes ‘War at Home’ an engrossing crime story as well as an important social document is the way Nelscott never lets it slide into cliché or historical party-game chatter.”
—Chicago Tribune

“This swift-moving book brings the receding past into sharp focus.”
—The Wall Street Journal