I’m pleased to announce that A Gym of Her Own is now available to preorder—at least, the ebook version is. The paper version will appear on the book’s release date, which is October 17.

I’m really excited about this book. It isn’t a Smokey Dalton book, although it takes place in the same time period. If you read the Smokey books, then you’r familiar with one of the main characters, Valentina Wilson. Only she’s different here than she is in Stone Cribs or in the later short stories. Gym takes Val and show us how she went from the victim of a horrible crime in Stone Cribs to the strong woman of the short stories. (Yes, there will be a Val-only novel someday.)

Anyway. Here’s the back cover copy: 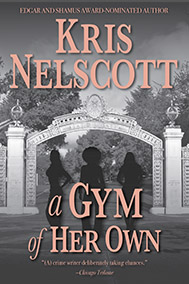 mbat nurse, a former legal secretary, and the owner of one of the first women-only gyms form an unlikely alliance in this fast-paced and riveting new work by the acclaimed historical mystery novelist Kris Nelscott.

The novel opens on the day of the Moon landing, July 20, 1969, two years after the Summer of Love changed Berkeley forever, and left lots of broken teenagers in its wake.

One of the first (if not the first) women-only gyms in the nation and the start of the Women’s Self-Defense Movement bring June “Eagle” Eagleton, Valentina “Val” Wilson, and Pamela “Pammy” Griffin together.

They never intended to face the kidnappings and murders of college students. But no one else paid attention.

An amazing trip into the experiences and lives of 1969 Berkeley told with riveting attention to detail. A read that will keep you turning pages into the late night and shock you at the same time.

I hope that intrigues you enough to pick up the book!