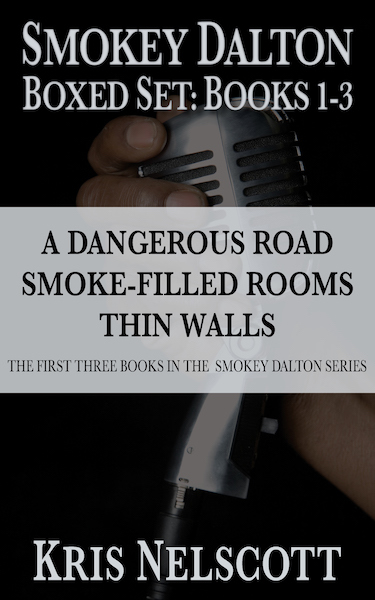 Called “an outstanding series” by Booklist and “triumphant” by the Chicago Tribune, Kris Nelscott’s Smokey Dalton mysteries boast numerous awards, including finalists for the Edgar and Shamus awards.

The Oregonian says: “The Nelscott series setting, in the turbulent late ’60s, gives her books layers of issues of racism, class, and war, all of which still seem to remain sadly timely today.” And Entertainment Weekly says of the main character: “It’s not hard to draw parallels between Nelscott’s PI Smokey Dalton and Walter Mosley’s Easy Rawlins, another secretive, canny black man trying to solve mysteries while circumspectly navigating the white world.  But Dalton’s no knock-off.  (Would you label the hundreds of hard-boiled detectives who’ve appeared in Raymond Chandler’s wake mere Marlow Xeroxes because they’re white?)”

This boxed set includes the first three books in the series: A Dangerous Road, Smoke-Filled Rooms, and Thin Walls.

Private Investigator Smokey Dalton works for Memphis, Tennessee’s black community. He has almost no interaction with the white hierarchy, even though they exist only blocks away. So he’s surprised the day a white woman walks into his Beale Street office. Laura Hathaway has sought him out because he’s a beneficiary in her mother’s will, and Laura wants to know why. So does Smokey. He’s never heard of the Hathaways, but his search will take him on a journey that will change everything he’s ever known.

Set against the backdrop of the strike and protests that will end with Dr. Martin Luther King’s assassination, A Dangerous Road combines the politics of race, betrayal, unexpected love, and the terrible cost of trust into a story so memorable the Mystery Writers of America chose it as one of the top five novels of the year and the Historical Mystery Appreciation Society honored it as the winner of the Herodotus Award for Best Historical Mystery.

On the run after the assassination of Martin Luther King, Jr., Private Investigator Smokey Dalton has settled under an assumed name in Chicago. But history won’t leave him alone. His job in security at the Chicago Hilton places him in the center of the protests at the 1968 Democratic Convention. Worse, a killer works his South Side neighborhood.

Smokey can’t ignore the crimes, any more than he can ignore the tension building in the city that hot August. He must take action, before he loses everything.

Chosen as one of the top ten mystery novels of the year by both Deadly Pleasures and Booklist.

Smokey Dalton and Jimmy, the young boy he protects, have settled into a new life on Chicago’s South Side. But when Smokey gets hired to investigate the death of a black man in a local park, he realizes that the murder might not be an isolated case.  The Chicago Police Department doesn’t really investigate black deaths, particularly near the South Side. Smokey thinks the case easy, until he digs deeper into the history of the area, a history that includes gangs, racism, and secrets so dark they threaten his very existence.

Chosen as one of the top ten mystery novels of the year by the Chicago Tribune.